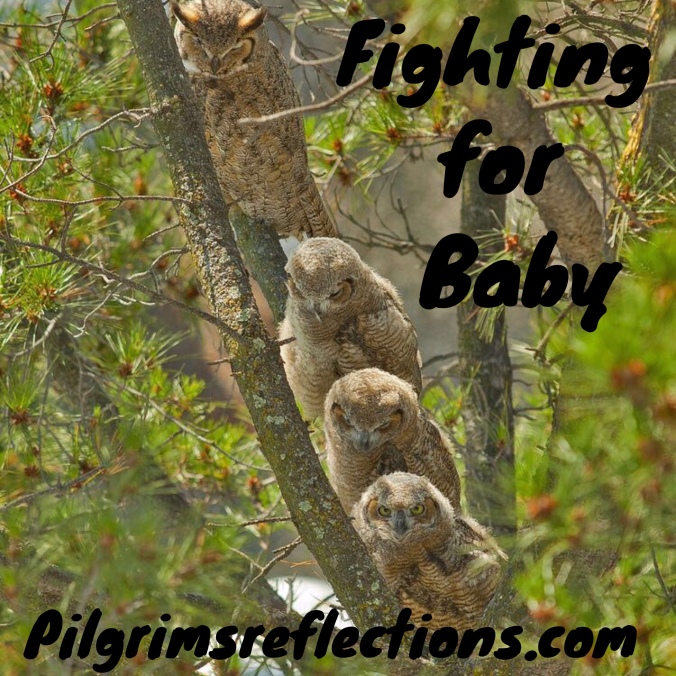 Have you ever been dive-bombed by a protective bird with eggs or new hatchlings? Have you ever been growled at by a dog who is protecting her litter? Maybe you have seen one of the countless nature shows that depict a mother fiercely defending her young. Or perhaps you have asked the mother of a new born if you can hold her baby, only to be looked at as though you have presently loss your mind. The common thread here is the protective instinct with which most, if not all, females of every species are born. There may be the rare exception, but overall, I would not suggest messing with the young of any mother, regardless of the species. It is this very instinct that makes the on going battle over abortion so odd to me. Women are actually fighting for the right to dispose of their young, and many times with as much vitriol as they would to protect their young.

So here’s my question. How is it possible that women could have turned on their nature in such a drastic way? The answer is actually rather simple. They have been culturally conditioned to believe that what lives inside of them is not a life, it is not a baby until it is born. Not all women buy this. In fact, in many cases a miscarriage of a wanted baby can lead them to see the truth, the life that is inside of them is indeed a living human. I am not discussing the moral implications of abortion here. I do believe there are moral implications, however my purpose here is to address the fact that women are going against their own nature to fight for the right to choose abortion over life. The sad truth is that our culture has become numb to this reality. It has become purely a fight over choice. On the one side it is the right of the woman to choose what is done with her own body, and on the other it is the restriction of this choice to protect the life of the unborn baby. The reality is that many of the loudest voices of either side are not actually for life, but rather they are for or against the choice of abortion. I am one who is avidly pro-life. That is to say that I am not just anti-abortion, but I also believe in taking care of  the babies as they grow up.

If we were to think back to the original examples, then we could think of some cases when this instinct is overridden, and the young are killed or left for dead. This is often due to the fact that either the mother’s life is in danger and/or there are not enough provisions for her and the young to survive. As for the mother’s life being in danger, this is often a provision for the consideration of abortion on all sides, though some would not even allow for this proviso. In the other case, I ask you to do a thought experiment with me. Imagine for a moment that a bird was unable to feed her young, so she left them to fend for themselves. Now if a bird should come along and take care of the birds that were left behind, do you imagine that the first bird would get angry at the second and fend her off so that the baby birds would be sure to die? I think it would be odd indeed for this to occur.  The fact is that mothers naturally want their young to survive, and also to thrive.

Now let us bring this back to human life. I think it is absolutely strange, and against their very nature for an expecting woman to desire for her offspring to die. However, I can see how a women in crisis would feel as though an abortion is the only option, because she cannot provide for her baby, but, the difference between the animals and us is the fact that we have a great number of entities in place to ensure the well being of both the mother, and her baby. Whether she should choose to keep the baby or to put the baby up for adoption, she has viable options to see to it that the baby is provided for.

It has actually been sited in many polls that the number of abortions is dropping. I am one to believe this is because fewer and fewer women are seeing it as a necessity. With all of the aids and agencies setup to help pregnant women in crisis,  the fact is that the choice for life is much easier now than it once was. Of course, the choice to end the baby’s life is still seen as just as much an option as well. It is my hope that women start to recognize the gift they have in the ability to bachildren. In the mean time consider the natural protective instinct in women, and ponder, if you will, what role that should play in the discussion on a woman’s right to choose life or death for her unborn baby in the current society in which we live.